Today Wolf Parade dropped their fifth studio album called Thin Mind via Sub Pop and Royal Mountain.
“Thin Mind refers to the way that being around too much tech has made our focus thin,” says keyboardist Spencer Krug.
“It’s opening one more page, scrolling one more thing,” adds guitarist Dan Boeckner, “and the weird, sort-of hollow automaton feeling that you get from it.”
“This record is very personal, but at the same time, we’re all coming from the same place of a general sense of anxiety,” says drummer Arlen Thompson. “How do you deal with the constant barrage of having your opinions swayed by all these different actors when you don’t know who they are or what their purpose is? There is no normal anymore.”
Thin Mind marks a return to the original power trio of Dan, Spencer, and Arlen, following multi-instrumentalist Dante DeCaro’s amicable departure from the group in 2018, after the conclusion of their world tour supporting Cry Cry Cry.
One month later, the trio got together at Risqué Disque, an old stone barn-turned-studio in the woods of Vancouver Island, to begin writing Thin Mind—emerging with an album about making sense of the present while reckoning with visions of the future.
“It’s the first record where we did the whole thing in one place from start to end,” says Arlen. “It was just the three of us until John came in, woodshedding in this moss-covered, rotting building.”
Paradoxically, the band’s decision to forge a future-forward sound using a myriad of synthesizers—from ‘80s synths and ‘90s MiDi to more modern, kitchen sink instruments—recalls the sonics of Wolf Parade’s earliest EPs.
Album highlights include “Julia, Take Your Man Home,” “Forest Green” and “Against the Day”, with lyrics split evenly between Dan and Spencer.
On “Julia, Take Your Man Home,” Spencer imagines the worst version of himself over a deep groove and an exaggerated, fictitious caricature.
“It’s not literally me,” he says. “I’ve never carved shapes that look like dicks into a bar, but it is the toxic male version of myself.”

“Forest Green” gallops along to a synthetic clip of Arlen’s electronic drum kit while Dan’s lyrics encapsulate the profound beauty, and ugliness, of Vancouver Island—not only where Thin Mind was recorded, but where Arlen and Spencer now live, and Dan grew up.
“The island has a really weird, pervasive darkness to it,” explains Arlen. “It’s got amazing nature, and there’s an inescapable spiritual vibe to the place. But it’s held with this tension between real estate money and nature now constantly being logged and developed. It’s a process that’s been happening for maybe 150 years—you’re watching this beautiful place just kind of melt.”

“Against the Day,” which features shared verses from Spencer and Dan, similarly constructs a synthetic shell to examine what’s natural and what is not.

“Dan told me it was about two vampires exploring the human world,” says Spencer, who assumed the role of one vampire in his verses.
“I wanted to tell a story about Lovecraftian, geological love passing in a place,” says Dan. “And two souls that were connected to each other. Every era that they go through, they are always on the outside of culture, always outsiders.”
Ultimately, the band was only able to subvert the “thin mind” phenomenon by jumping right back into its creative process after Cry Cry Cry’s tour, with each member bringing their anxieties out of the modern world and re-examining them on an elemental level.
“There’s this positive element to Thin Mind, too,” explains Dan, “if you’re in that liminal, very modern psychological state in nature. At best, you become an incredibly powerful being for interpreting and processing information at a speed that our parents and grandparents couldn’t possibly comprehend. In the cognitive dissonance where we made this record, there was no escape.”

END_OF_DOCUMENT_TOKEN_TO_BE_REPLACED

Talk about a song of epic proportion!!
It’s been a crazy 2016 for Preoccupations since they released their self-titled album.
They released the standout 11-minute track Memory featuring Dan Boeckner of Wolf Parade/Operators.
Check out the music video!

Here is the info about the music video:
“The short was a collaborative effort between award winning Canadian filmmaker Kevan Funk and the band’s Michael Wallace. It portrays the story of a young man (played by Wallace) who begins to feel the presence of a mysterious and enigmatic invisible force, one which seems to be beckoning him. The song addresses mental illness, and the accompanying short film takes us on a journey as we watch someone get lost inside his own head, gradually losing the ability to define the real from the constructed.

“I don’t mean to sound dark, but there’s something poetic about a fire burning inside someone so intensely that one day, it actually physically manifested,” Funk tells NPR. “You ask yourself, how much pain can we take? How much control do we have?”

“Memory” is over 11 minutes of sonic excellence, a track which the New York Times wrote is “…a suitelike excursion through bewilderment, disillusion, alienation and entropy” while Consequence of Sound described it as “a swirling mass of moving parts” split “equally between mechanical clanging and buzzing, fuzzed out guitar work and soaring heart-on-sleeve indie piano runs.” Stereogum simply say, “Memory” is “an 11-minute gracefully unspooling meditation.”

Preoccupations received high praise from critics here in North American and around the world with many marveling at the band’s ability to blend synths and samplers with post punk guitars, creating a musical world which is dark and moody and yet beautiful all in one moment. Pitchfork sums up the album most succinctly writing “the power of Preoccupations lies not in some victory but in the battle.”

The band are finishing up an extensive world tour but are already looking to more live dates in 2017, including an appearance at the legendary Primavera Festival. The live show adds another dimension to the songs and has to be experienced. The Guardian in a recent live review wrote “It’s a blisteringly intense form of release.” More North American dates will be announced in the new year.

Kevan Funk is an award winning filmmaker, who’s work has screened and won awards at various prestigious festivals around the world. His debut feature, Hello Destroyer, premiered at this year’s Toronto International Film Festival to acclaimed reviews. His debut short, A Fine Young Man, premiered at TIFF and won the Grand Jury Prix at the Melbourne International Film Festival. Kevan’s short films Yellowhead and Bison both premiered at TIFF, the former being awarded a Special Jury Prize, and both were named to Canada’s Top Ten in their respective years. Kevan’s short Destroyer, created through the TIFF Talent Lab, was runner-up for the RBC Emerging Filmmaker Award.”

So here is #49 for the “Best of 2016” Canadian albums.
This one is by Operators who is spearheaded by Dan Boeckner. 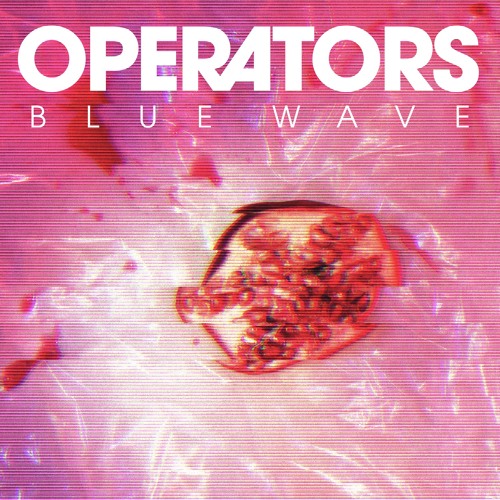 Blue Wave is their debut full-length and is filled with synth pop rock dancey music.